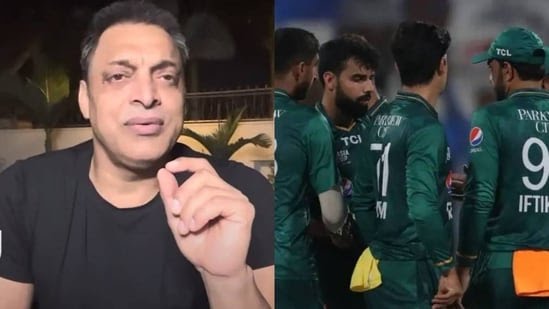 Pakistan announced their 15-man squad for the World Cup with 3 reserves. When Shaheen Shah Afridi made his return, the middle order of Pakistan is still not sorted.

Babar will lead the team with Shadab Khan as his deputy. Dahani made into the reserves while Fakhar Zaman is a reserve due to an injury.

When on Thursday the team was announced, Shoaib Akhtar was furious with the Selection Committee as he think the job is not done well. The loopholes are still very visible and the team is still very vulnerable.

While talking on his YouTube Channel, Akhtar is opinionated about the selection as he lashes out at the PCB.

Further in his talk about the chief selector and batting coaches he said and we quote, “Jab chief selector average hoga unke decision bhi average honge. Saqlain(Mushtaq) last played cricket in 2002, I don’t want to say this as he is my friend, but I don’ think he has any idea about T20 cricket. I don’t think this is your forte. Meanwhile Mohammad Yousuf is not even there is the team. Had he been there, how could our batting not perform? Yousuf is an asset in the dressing room, but I don’t know how much say he has in this team. Iftikhar Ahmed is Misbah part two. Mashallah, we had Rizwan and now he has Iftikhar for company. With this team, we might get knocked out in the first round itself. I am really scared as our batting has no depth. Our captain is also not cut out for this format as he always looks for classic cover drives. He wants to look classic.”

Talking in such a manner where he talks about a legend and the Chief Selector of the Pakistan team, he made his disagreement with the team selection very clear.

His recent rants about the PCB can be very noble but many think he has his own agenda and this news are just there to be in consideration. Consideration of a post in the administration of Pakistan’s Cricket Board.