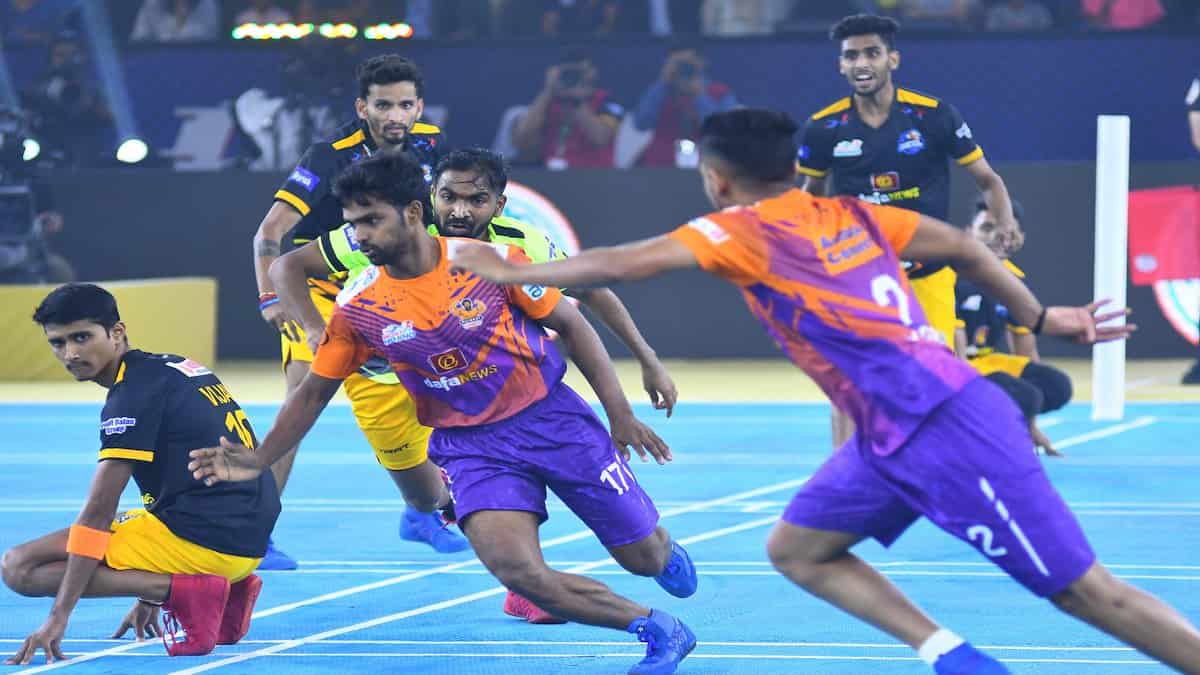 Gujarat Giants defeated Mumbai Khiladis by 18 points. Gujarat captain Ranjan led from the front by scoring six points for his side in the attack as the giants team extended their unbeaten run in the league. Vinayak Pokarde and Nilesh Patil also added eight and seven points respectively. For his brilliant show in the attack, Ranjan was adjudged Best Attacker of the Match.

He received the award from a special guest of the match, Avinash Sable, who won the historic silver medal in the men’s 3000m steeplechase at the recent Commonwealth Games held in Birmingham. Sable also enjoyed the thrilling action of the league. Durvesh Salunke of Mumbai Khiladis impressed in the attack by clinching 11 points for his side.

He was awarded the Ultimate Kho of the Match award. Gujarat’s Suyash Gargate received the Best Defender of the Match award. Gujarat Giants began the match with the powerplay, activating their two wazirs, Akshay Bhangare and Abhinandhan Patil. The decision paid off as they dismissed the first batch of Mumbai Khiladis, comprising skipper Vijay Hajare, Rohan Kore, and Visag S, in just two minutes and seven seconds.

With Ranjan and Pokarde dismissing two opposition defenders each, Gujarat Giants finished the first seven minutes at a 25-0 lead by capturing 10 defenders overall. Mumbai, on the other hand, also started their defense with a powerplay and took only one minute and 30 seconds to out the first opposition batch with Gajanan Shengal taking the first two wickets, Pokarde first, and then Mareppa with a brilliant pole dive. Salunke dismissed the final player of the batch, Akshay Bhangare by a pole dive.

Salunke grabbed 11 points for Mumbai Khiladis by dismissing four defenders, three of them with stunning dives. At the innings break, scores were locked 27-27 with Gargate earning two bonus points for Gujarat in defense by spending more than 2 minutes and 30 seconds.

Gujarat Giants started the second innings with more aggression as they added an impressive 37 points to their score. Nilesh Patil took three wickets for them. Though Mumbai gave their all in an attempt to recover but managed to score only 21 points in the final seven minutes as Gujarat Giants completed a comfortable win over Mumbai Khiladis.