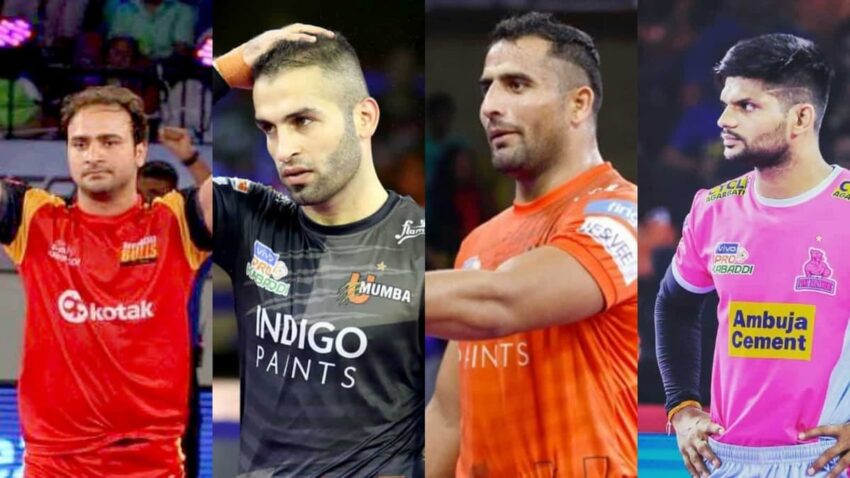 PKL Top 5 Defenders in tournament history – Before the start of the 9th Season of India’s biggest domestic sports tournament Pro Kabaddi League on 7th October, let’s have a look at the top 5 defenders in the history of PKL. The importance of a defender in the team increases the responsibility of these players immensely. The name at the top of the list could not find a buyer in the recently concluded auction of the league which came in as a surprise for many fans of the game.

Former Tamil Thalaivas captain Surjeet is one of the only 6 players in the tournament who has scored more than 300 tackle points since its inception. His total lies at 331 points in 114 matches. Surjeet has 22 super tackles in his name with 29 High 5s. His success rate has been very impressive with 47% in total 655 tackles.

Ravinder Pahal’s ankle’s hold is very hard to get out of which can also be seen by his numbers as he proudly sits in 4th place with 338 points in 120 matches. Pahal’s ankle holds also made him famous by the name “The Hawk”. With 19 Super tackles and 23 High 5s, Ravinder can instill fear in the minds of the best raiders of the tournament.

All-rounder Sandeep Narwal with the help of his fabulous body blocks and corner defending has scored 348 tackle points participating in 148 total matches. Narwal, a part of last season’s champions team of Dabang Delhi, combined has more than 500 points in raiding and defending.

Iranian defender Fazel Atrachali acquires the 2nd spot in this list with 368 points in 125 matches. Fazel also known as “Sultan” is famous for his back hold with which he came up as the top defender in the 4th as well as the 7th season of the tournament. Captain Fazel of U-Mumba plays the left corner on the mat. He was formerly also a part of Patna Pirates and Gujarat Giants.

The record for most tackle points in the history of the Pro Kabaddi League is in the name of Manjeet Chillar. Even though Chillar went unsold in the auction for season 9, his impact on the game cannot be neglected. Chillar has 391 tackle points in 132 matches with 25 high 5s and 17 super tackles. With approximately 3 successful tackles per match, His position at the top of the list is very well deserved.