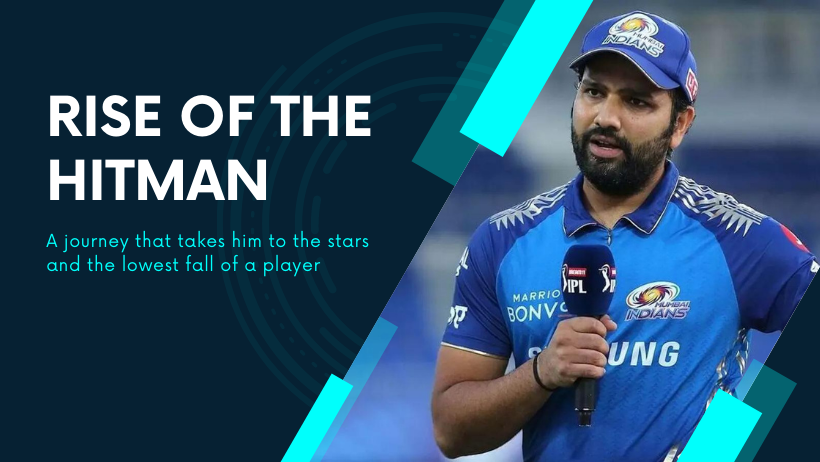 It is said that a genius is not born but made. Life-journey of our beloved hit-man Rohit Sharma is an example of that. From born to parents, who could barely manage the expenses of child-bearing, to leading India’s Cricket team across the formats. Let’s have a look at the journey full of ups and downs, thorough hard-word and persistence of Rohit Sharma in this article.

Rohit Sharma was no less than a prodigy and he gave enough examples while playing for Mumbai in Ranji or local teams. It was his performance in the Ranji Trophy (207 runs in his first match) that gave him a call for the T20 team India. 2007 was a time when India had a rather forgettable ODI World Cup sting and was looking for young talent to make a case for the country in inaugurant T20 World Cup. Rohit Sharma did not take this opportunity lightly and played a mature and remarkable knock against South Africa which knocked out SA from the world cup and led India into Semi-finals. Rohit Sharma was no one-time miracle and he played a crucial knock of 30 runs of 16 balls against arch-rival Pakistan in the Final. No doubt it was a team effort that helped India to pick the trophy but here onwards Rohit Sharma made his debut in style.

In 2007, Rohit also got his ODI cap but due to a lack of consistency and form, he was yet to be a permanent member of the ODI Squad. It was disheartening for Mumbaikar when he did not get called for the 2011 ODI world cup. Perhaps, it was a reality check for him and inspired him to work towards his technicalities.

After the era of Sachin, Dravid and VVS, it was natural to look for emerging yet mature talent in a cricketing circle. This time when Rohit got his call for a much-anticipated call for Test Debut, he scored blistering 177 runs against west-indies to give some happy tears in the eyes of fellow Indians as God of Cricket was due to retire in the next match.

After his two back-to-back centuries in a Test match, Rohit unleashed his prowess against Sri Lanka when he alone scored more than 13 runs than what Sri Lanka could score. Yes, record-breaking 264 against Sri Lanka and that was just the beginning. He is the only player as of now, who has scored 3 double centuries in the ODI format, truly the sky is the limit.

What makes Rohit a Hit Master:

Rohit, when made his debut, did not open for the country but somewhere deep-down, a hit-master was waiting for more balls to play and field restrictions to make it move more towards the boundary. In the decade 2010-2019, Rohit tops the chart when it comes to big innings potential. He has 8 150+ scores in his name during that era. Rohit’s boundary percentage is also quite high when compared to his counterparts. Rohit’s ability to play pull shots with such ease makes the bowler look like an amateur.

Rohit Sharma precedes stalwarts like Kohli and Sachin when it comes to playing knock where it matters more than just winning the match. Having already made his entry in style in the 2007 T20 World Cup, Rohit was the 2nd Highest Run Scorer for India in the 2015 ODI World cup. India could not make it big but Rohit made sure that he does not look back. The year 2019, is probably the best year for Rohit Sharma where he is only second to almighty Sachin Tendulkar by hitting 648 runs in 9 innings with a whopping average of 81. Post his fabulous performance, he was awarded one of the highest sports honors in the country, the Major Dhyan Chand Khel Ratna Award in 2020.

All-Format Captain: Expectations beyond an opener

Since 2019 when Rohit was appointed as vice-captain for the ODI team, he was always in the run to lead the team one day. Being a contemporary of Virat Kohli, it was a matter of when and how long. Post India’s poor performance in T20 World-cup in 2021, it was time to end speculations and give Rohit what he prepared himself for.

“ As far as Rohit Sharma is concerned, he is the number one cricketer of our country, he is playing all three formats of the game,” said India’s National selection committee chairman Chetan Sharma post appointing Rohit as captain. Rohit’s role as captain in an international career so far has been like a fairy tale, winning 80% of T20 and ODI Matches he captained but that is a limited set of data to pass a judgment. Before he was appointed as the first choice for captaincy, he was a shadow leader standing with stalwarts like Dhoni and Kohli. But, when it comes to IPL, it was otherwise as Rohit proved himself, if not better than an equivalent, to Captain cool by winning 5 titles for Mumbai Indians. He joined MI after his successful engagement with Deccan Chargers and was groomed under the likes of Ponting and Sachin. Leading MI year after year to win IPL Trophy, prepared hitman to handle to a pressure of big matches and guide the team. Rohit’s record and his abilities as captain definitely give hope that Rohit provide much-needed direction to India’s full of the potential squad. With age playing its own role, Rohit’s career seems to be on the retiring side but before retiring Rohit has this opportunity to make it worthwhile.  Rohit might not have long years left in his as captain, as Chetan Sharma indicated while appointing him captain, but major ICC events are around the corner. Rohit’s ability to absorb pressure in big matches can be a turning point for India’s cricket team. Another feather is Rahul Dravid as head coach of the Indian Cricket Team. Both captain and coach can end the curse of India to perform in semis and finals of ICC events. Let’s hope that Rohit makes his country proud by lifting the upcoming T20, ODI world cups, and test championship.