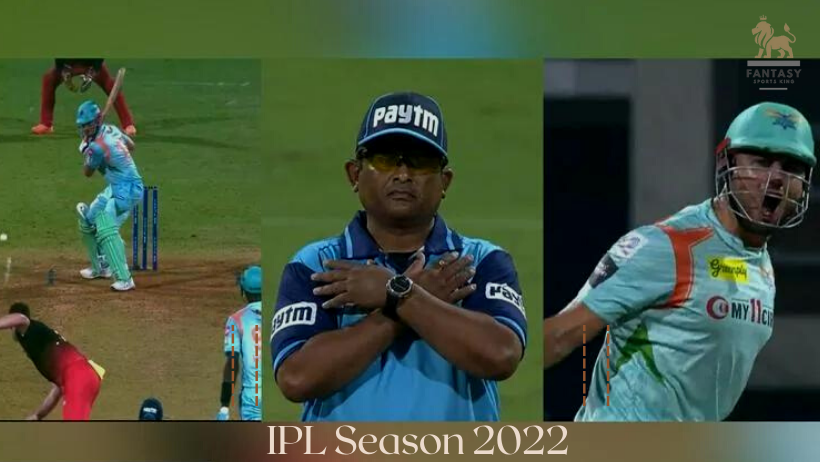 The IPL Mega Season is going great, and the fans appreciate it. On the other side, fans are frustrated by poor umpiring and incorrect judgments. Because many wrong decisions made by umpires in the past have affected the outcome of matches. As a result, BCCI should take action in this regard. Further, supporters would be annoyed by such decisions because they cheer for their favorite teams.

Meanwhile, one of the most heated debates about bad umpiring erupted in the DC Vs RR match. And there were a lot of similar incidents in front of the audience. So, in this post, we’ll look at the top five worst umpire decisions made during IPL season 2022.

1) DC Vs RR Big Controversy: Powell not given a no-ball

Rovman Powell, the DC batsman, was on the rise in the 34th match of the IPL 2022 when 36 runs were required in the final over. Then he brilliantly hammered three straight sixes into Obed McCoy’s ball, causing him to become furious. However, McCoy bowled a high full-toss off the third delivery. And despite the clear evidence, the on-field umpires Nitin Menon and Nikhil Patwardhan did not declare it a no-ball.

Yet, the ball was above the waist. Besides, the DC dugout and coach Pravin Amre protested the umpire’s ruling and halted the match. On the other hand, the umpire was unwilling to take a chance on the outcome. Nonetheless, Rishabh Pant called Powell to the pavilion.

Due to rude behavior, Pravin Amre was suspended for one match, and Rishabh Pant was fined 100% of his match money. Shardul Thakur, the All-Rounder, was also penalized 50% of his match expenses. Finally, poor umpiring in the IPL 2022 has disappointed spectators because it was clear that the ball was no-ball.

2) Virat Kohli loses his calm after being LBW.

Furthermore, everything falls wrong as Virat Kohli goes for a review. On the other hand, the third umpire couldn’t tell whether the ball was struck first with the bat or the pad. As an outcome, the on-field umpire retains his unprecedented decision. Also, Virat Kohli loses his cool after this surprise result. Once again, fans raised concerns about poor umpiring.

3) Wide Ball not given to Marcus Stoinis

At the crease, the umpiring has been consistently awful this season. Not only do umpires make mistakes under challenging choices, but they often make mistakes in easier ones where they shouldn’t. The 31st match between the Lucknow Super Giants and the Royal Challengers Bangalore featured similar umpiring.

Josh Hazelwood was bowling to Marcus Stoinis in the 19th over when the whole thing happened. Besides, Marcus Stoinis was not given a clear wide in the first bowl by the umpire. Furthermore, he was caught out on Josh’s following ball.

As a result, when Stoinis emerges, he misunderstands the significance of that wide ball and loses his calm due to the unexpected outcome. So making the same mistakes over and over again affects the seasoned umpires. The fans’ moods deteriorated as a result, and they were pretty depressing.

Punjab Kings and Sunrisers Hyderabad met for the 28th time in the Indian Premier League. The batting performance of PBKS in that match was not up to standard. When Shahrukh Khan, the PBKS batsman, and Liam Livingstone were batting together, they had a solid partnership. And with that, one ball from T Natarajan’s 14th over touches Shahrukh Khan’s helmet.

On the other hand, the umpire does not examine the situation and instead raises his hand. And because Shahrukh Khan was aware of the reality, he took the review right away. The replay was shown to the third umpire, and it was evident that the ball did not touch his bat.

As a result, the poor decision in the field was altered. Shahrukh Khan was then given a not-out. Finally, no one has ever seen this umpiring style before. Following this occurrence, many fans began to troll the umpire. However, Shahrukh Khan only managed 26 runs in 28 balls.

Kane Williamson joined Abhishek Sharma as an opening batter in the fifth match of the IPL 2022 against Sunrisers Hyderabad and Rajasthan Royals. Trent Boult, on the other hand, only gave up two runs in the opening over. Prasidh Krishna was sent in to bowl the second over. Kane Williamson’s bat took a tiny cut in the fourth bowl of that over, and the ball went to Devdutt Padikkal at first slip.

And he took the catch well. However, this matter will be decided by the third umpire. The third umpire then confirmed the catch and gave it. Kane Williamson was then dismissed after scoring two runs in 7 balls. When the replay was shown, the ball in Devdutt Padikkal’s hand touched the ground. On the other hand, Kane Williamson was not pleased with this challenging decision.  So this was yet another bad umpiring performance in the IPL 2022.

So, here are the top five worst umpire judgments made throughout the 2022 IPL season. Aside from that, fundamental decisions can lead to significant disagreements. So far, in the first half of the IPL 2022, umpires have made numerous errors and inaccurate judgments.

However, it will be fascinating to see how the umpire renders his verdict in the second half. More importantly, let’s see if BCCI takes any action on it. Finally, we like to express our gratitude for taking the time to read our content.