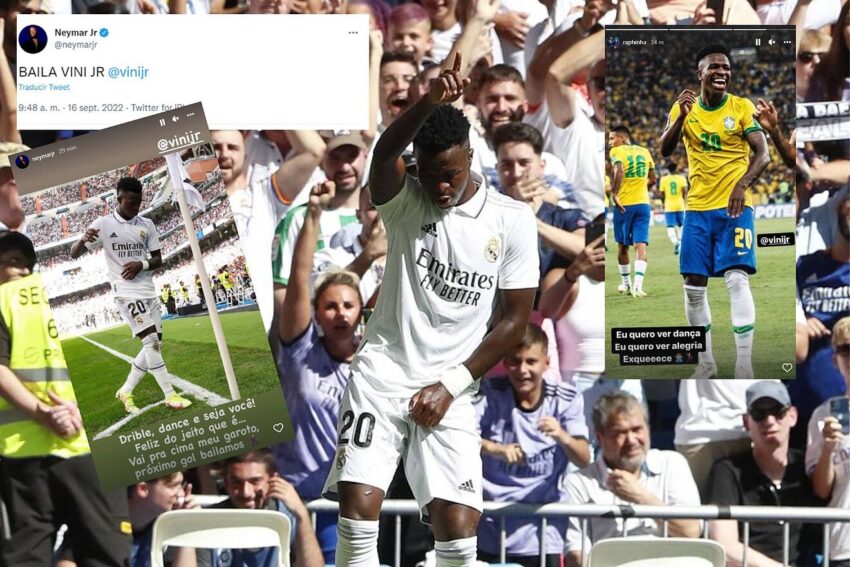 Real Madrid extended their perfect start to the La Liga season when they beat city rivals Atletico at the Metropolitano, but racist chanting directed at Vinicius Jr outside the stadium marred the derby.

Atletico fans were filmed racially abusing Real’s Brazilian forward Vinicius ahead of Sunday’s game, which the visitors went on to win 2-1.

After the match, Atletico said on Twitter: “Support Atleti with passion and respect for opponents.”

The incident follows comments from the head of the Spanish Football Agents Association, Pedro Bravo, who was criticised last week for saying Vinicius needed to stop “monkeying around” when celebrating goals, with a number of Brazilian footballers, including Neymar and Dani Alves, denouncing his remark as racist.

Bravo said the comment was not intended to be interpreted as racist, and instead was just a common turn of phrase used in Spanish.

Vinicius and Real, however, both released statements condemning the racist abuse the player has suffered during his career.

Also, Vinicius and Rodrygo celebrated Real’s opening goal in the game by dancing in front of the Atletico fans as Real continued their winning start to the season.

Vinicius posted a picture on Instagram with the caption “Dance where you want”, while his international team-mate Gabriel Jesus of Arsenal said earlier on Sunday that his dancing celebration for his goal against Brentford in the Premier League was dedicated to his friend.

Goals from Rodrygo and Federico Valverde put Real in a commanding position against their rivals. Mario Hermoso pulled a goal back for the hosts late on but they were unable to find an equaliser, with the defender sent off in injury time.

Victory means Real return to the top of the LaLiga table on 18 points from six games, two ahead of Barcelona in second. Atleti are seventh, eight points behind their neighbours.