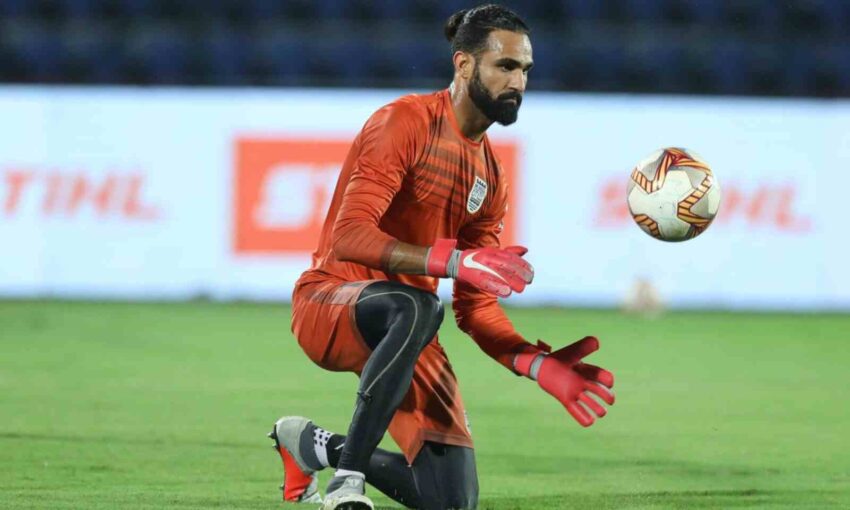 The custodian, Amrinder Singh joined Mumbai City FC for Hero ISL 2016 and kept five clean sheets in six matches for the Islanders, winning the Golden Glove award in his debut season with the club.

Odisha FC has completed the signing of Indian International, Amrinder Singh. The Punjab-born custodian joined the club as a free agent for the upcoming season.

Amrinder Singh was part of Pune FC’s youth team and went on to play for their senior team before moving to ATK FC for Hero ISL 2015. After that, he turned out for Bengaluru FC in the Hero I-League.

The custodian joined Mumbai City FC for Hero ISL 2016 and kept five clean sheets in six matches for the Islanders, winning the Golden Glove award in his debut season with the club.

Amrinder from Mohun Bagan to Odisha:

The 2017-18 campaign proved to be even better for the goalkeeper as he finished with 59 saves — the most by a keeper that season. The India international impressed again in the 2018-19 campaign, keeping seven clean sheets in 19 matches. The 2019-20 season saw Amrinder keep four clean sheets.

He was one of Mumbai City FC’s best players in the 2020-21 Hero ISL, keeping 10 clean sheets in 23 matches as the Islanders secured the League Winners Shield as well as the Hero ISL trophy. In a surprise move, the shot-stopper joined ATK Mohun Bagan in May 2021.

Initially, Amrinder started at the under-17 level as a striker at Sports Wing Academy but his coach, Yarvinder Singh, noticed that Amrinder had a good build and reach, and encouraged him to be a goalkeeper.

He started excelling as a goalkeeper and stayed at the Sports Wing Academy for another two years. While still at Sports Wing, however, Amrinder was selected by the Punjab Football Association to represent the Punjab state national team at the under-17 and under-19 levels.

His greatest achievement while with the Punjab team was when he helped Punjab win the BC Roy Trophy. After winning the BC Roy Trophy, he was advised by former Pune player Asim Hassan’s father, a well-known coach in Punjab, to trial at the Pune Academy. He passed the trial and was placed in the under-19 squad. International Career