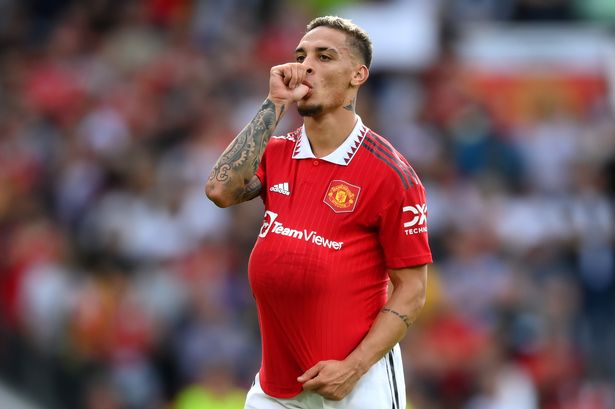 Manchester United manager Erik ten Hag highlighted £82m goalscoring debutant Antony for his bravery and character after the Brazilian helped his team to a 3-1 success over Arsenal at Old Trafford.

Antony became the Premier League’s fourth most expensive player when he completed his move from Ajax on Thursday.

The 22-year-old has already become a crowd favourite, not just for his goal, driven into the far corner from Marcus Rashford’s pass, but also his celebration, in front of the Arsenal fans, which earned a ticking off from referee Paul Tierney.

What Erik Ten Hag has said:

“During the transfer window we looked for players with the right character, who can fight and battle.”

Antony has character in abundance and kept running at the Arsenal defence until he was replaced by Cristiano Ronaldo just before the hour.

After his stand-off with Ajax over a move he feared was not going to happen, it was Antony’s first appearance since 14 August, so Ten Hag anticipates a player he got to know so well in Amsterdam will offer far more as the season progresses.

“He has missed some training, so he lacks a little bit of power but you can see his potential,” said Ten Hag.

“He is really good with his pace and his dribbles and also his pressing capabilities. The intensity of the Premier League is high and that is going to be a challenge for him but we have seen his potential.”