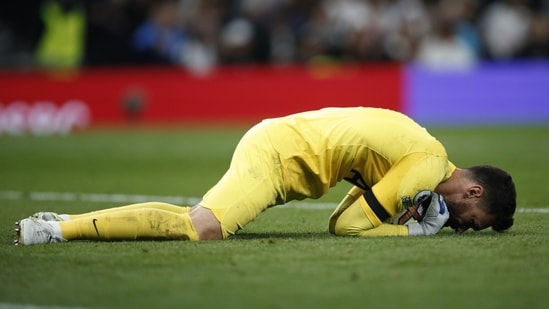 The French football federation said the Tottenham goalkeeper, lloris will miss the games against Austria and Denmark because of a right thigh injury. Nantes goalie Alban Lafont was called up as a replacement.

France captain Hugo Lloris has been ruled out of upcoming Nations League matches as a series of injuries led to further replacements in coach Didier Deschamps’ squad on Monday.

The French football federation said the Tottenham goalkeeper will miss the games against Austria and Denmark because of a right thigh injury. Nantes goalie Alban Lafont was called up as a replacement.

AC Milan defender Théo Hernandez has also been withdrawn from the squad because of a torn adductor muscle. He will be replaced by Aston Villa left-back Lucas Digne.

France plays Austria on Thursday and travels to Copenhagen three days later to take on Denmark.

Les Bleus face relegation to the second tier of the Nations League. The defending champions are in last place in Group 1 with two points from four games. Denmark leads with nine.

Messi, Neymar and Mbappe have made an explosive start to the new campaign, with 32 goals and assists between them already this season, as they relish Galtier’s 3-4-3 formation.

Neymar and Messi have already got 22 goals and assists after six games this campaign, compared to just 36 in all of last season.

With Sergio Ramos and Marquinhos’ range of passing and Presnel Kimpembe’s ability to carry the ball into midfield, PSG possess three centre-backs who provide the perfect platform to play possession-based football.

The system also meshes well with the style of their wing-backs. Nuno Mendes and Achraf Hakimi are explosive athletes who flourish when allowed to charge forward and carry the ball into the final third.