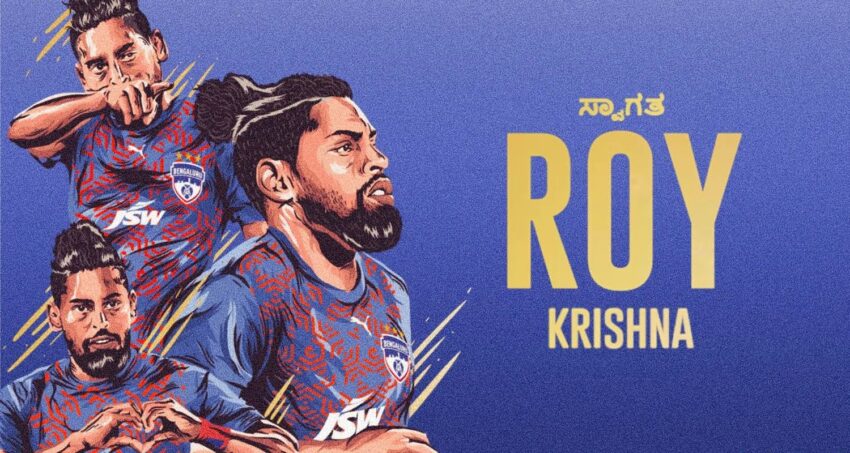 A Roy Krishna strike in the final minute of added time in extra-time saw Bengaluru FC win 2-1 against Odisha FC in the quarter-final of the Durand Cup, at the Kishore Bharati Krirangan on Saturday.

Substitute Sivasakthi Narayanan gave the Blues a 1-0 lead in extra-time before Diego Mauricio pulled level with seven minutes left to play. And just as the game looked headed to penalties, Krishna pulled Bengaluru FC over the line with a fantastic strike from distance.

Odisha had the first chance of the game in the 11th minute when Nandhakumar Sekar found himself in a pocket of space but his effort was saved well by Sandhu. Bengaluru FC had a chance of their own ten minutes later when Javi Hernandez saw his corner punched away, and Krishna’s effort on the rebound clipped the crossbar on its way out.

Both sides went into the break as a cagey first-half came to an end with the scores level.

Into the second period, Bengaluru FC pushed further forward and almost found the back of the net when Hernandez’s free-kick found Sandesh Jhingan whose header flew off target. Grayson made changes as Danish Farooq and Leon Augustine made their way onto the pitch, replacing Rohit Kumar and Roshan.

Augustine’s threat down the flank created the Blues’ next chance, with the winger winning a free-kick down the flank. Hernandez’s take found Aleksander Jovanovic, but the Australian’s header flew inches wide of the frame. Odisha were reduced to ten men with ten minutes to play when Shubham Sarangi’s foul on Augustine prompted the referee to brandish a second yellow card.

Bengaluru FC pushed forward in search of a winner, but the whistle blew to signal the end of regulation time.

Grayson rang in more changes, with Sivasakthi replacing Chhetri and Faisal Ali coming on for Parag Shrivas. The striker made an instant impact, finding himself at the end of Ralte’s save to slot home from close range to make it 1-0.

Bengaluru FC took the lead into the short break, and almost found the net once again on the other side when Augustine closed down Ralte’s attempted clearance to make the block. The ’keeper found himself wrong-footed, but the ball trickled wide of the frame. Against the run of play, Odisha FC found an equaliser through Mauricio, who nodded home a free-kick from Sahil Panwar to make it 1-1.