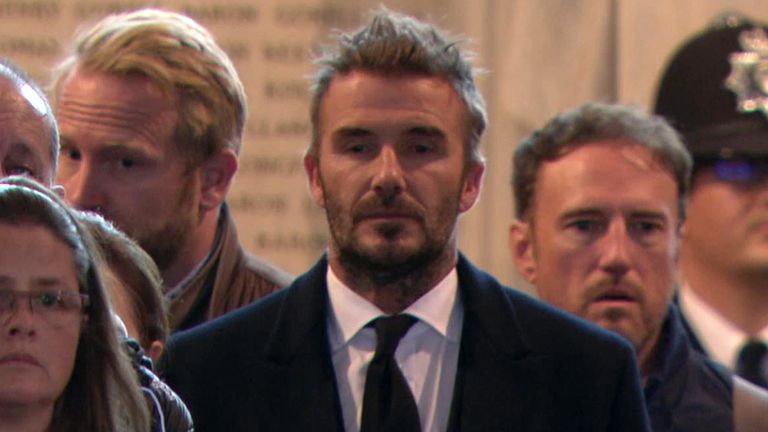 An emotional David Beckham said paying his respects to the Queen was “special” after he queued for 12 hours to see Elizabeth II lying in state.

The former England captain, 47, was among those who took their turn to walk past the coffin at Westminster Hall.

Footage appeared to show him wiping away tears.

“It’s special to be here, to celebrate and to hear the different stories that people have,” he said afterwards.

Beckham was presented with an OBE by the Queen in 2003 for his services to football.

He recalled: “To receive my OBE, I took my grandparents with me – who were the ones that really brought me up to be a huge royalist and a fan of the Royal Family – and obviously I had my wife there as well.

What Beckham has said:

“To step up, to get my honour – but then also Her Majesty, to ask questions, to talk. I was so lucky that I was able to have a few moments like that in my life, to be around Her Majesty.

“It’s a sad day, but it’s a day for us to remember the incredible legacy that she’s left.

“Every time that we stood there when we wore those Three Lion shirts and I had my armband and we sang God Save The Queen, that was something that meant so much to us.

“Every time that we did it, it was something special.”

Beckham joined the long queue along the River Thames at 02:00 on Friday and revealed that he and those around him had been fuelled during their wait by Pringles crisps, sherbet lemon sweets, coffee and donuts.

“We all want to be here together. We all want to experience something where we celebrate the amazing life of our Queen and I think something like this is meant to be shared together,” he said.

“I thought by coming at 2am it was going to be a little bit quieter – I was wrong.”