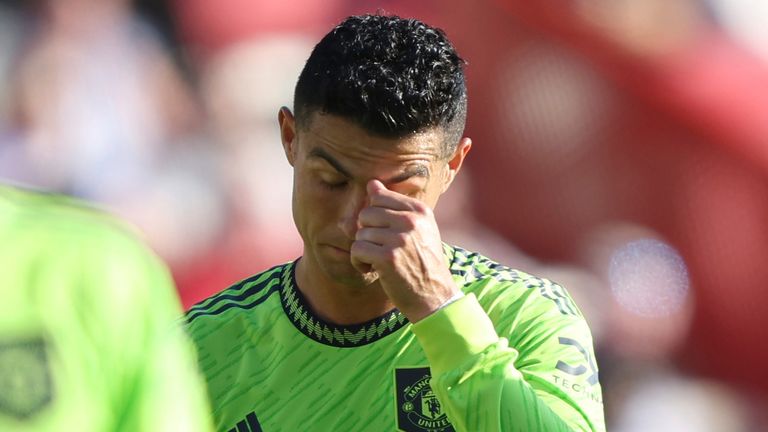 Cristiano Ronaldo’s future at Manchester United is facing further scrutiny but the club have denied speculation his contract will be terminated.

The 37-year-old has 12 months left on his current deal with the option of a further year.

Manchester United’s official response is that the Portugal international is not for sale. A spokesperson for the club said: “There is no change in the club’s position”.

Ronaldo cut a frustrated figure during United’s 4-0 defeat at Brentford on Saturday, which left Erik ten Hag’s side bottom of the Premier League table.

“I’m a little bit disappointed in him because he’s letting the manager go into those press conferences. Cristiano Ronaldo is now a good age. He’s been the greatest player in the world along with Lionel Messi for the last 10 years. He’s got all the experience in the world.

“Would it be too much to ask for him to come out and do an interview to clear things up, tell us what he’s actually thinking and what actually is happening?

“I think that would be something that would be a start. So, for me, I am disappointed because that clarity we haven’t got and the reason Ten Hag is getting a bit jumpy in his press conference is because he’s being asked difficult questions. He’s probably not really telling us the truth of it because he can’t.

“The reality of it is if a Champions League club comes in for Cristiano Ronaldo in the next two weeks, I think we know he wants to take that move.”

“There’s a bigger thing for me also because I want his Man Utd career to end well. What he’s achieved at the club and what he’s achieved in the game, is it too much to ask for the next 12 months for him to encourage the young players, be a leader on the pitch and do the interviews when your team win and when they lose.”