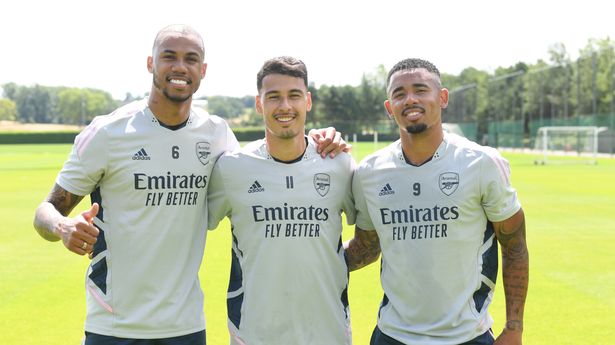 The three players have been a key part of Arsenal’s impressive start to the season which has powered them to the top of the Premier League after six matches.

But they will not play any role in Brazil’s pre-World Cup matches against Ghana and Tunisia in September.

Tite has included Flamengo striker Pedro, who is the top scorer in this season’s Copa Libertadores with 12 goals, as a new attacking option for Brazil instead of the three-goal Jesus.

Brazil are also set to experiment with two new defenders called up for the first time, Juventus’ Gleison Bremer and Roma’s Roger Ibaez, leaving no place for Gabriel.

The other most notable absences in the squad for Brazil’s last friendlies before the final World Cup squad is announced were defender Dani Alves and midfielder Philippe Coutinho while Martinelli, who has three goals this season, is also staying at home.

Liverpool’s Alisson, Fabinho and Roberto Firmino have all been selected as have Manchester United midfield pair Casemiro and Fred. There are also places for United’s £85m signing Antony and West Ham’s club-record purchase Lucas Paquet.

Brazil are in Group G at the World Cup which starts in November in Qatar along with Serbia, Switzerland and Cameroon.