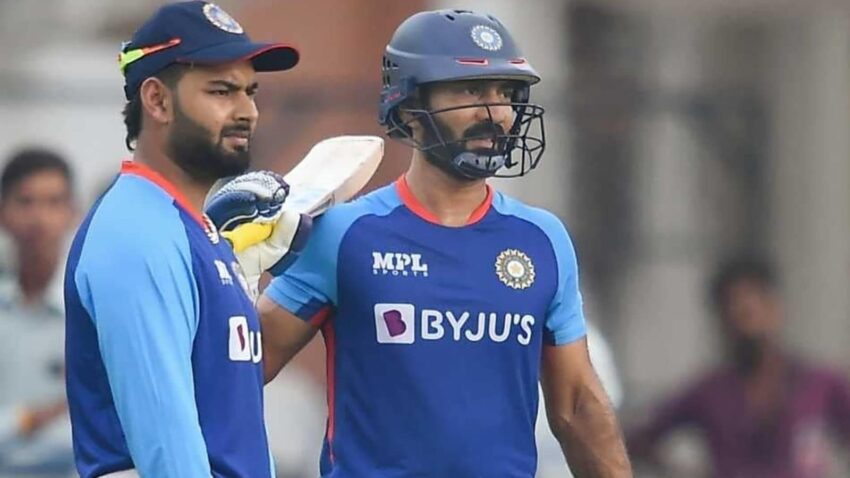 Rishabh Pant, whose place in the T20I side of the Indian team has been under the hammer for a long time. He was dropped yet again from the team for the 1st match against Australia where India was defeated, all praises to Australia’s record run-chase of 209 runs in 19.2 overs.

Rohit Sharma picked Dinesh Karthik over him as he did in the Asia Cup opening match. Pant and heroics were largely missed but the middle order proved to be worthy once again with Suryakumar Yadav and Hardik Pandya shining in the lineup.

Dinesh Karthik though was spent cheaply again adding to his increasing string of low scores with a 5 ball 6 in the match. A wrong decision from the umpire was also not enough to keep Karthik on the crease as he walked off after a successful review from Aaron Finch.

Matthew Hayden, who was part of the English commentary team pointed out the fact about India missing Pant and said some things that will surely boost the morale of the young Indian wicketkeeper coming from one of the greatest batsmen to ever grace the game of Cricket.

Hayden started by saying, “Rishabh Pant would be picked in every side if I was the selector. He is just the future. He needs to be backed and needs time. Even if it’s through runs or form, he should be there in my opinion. He is a superior player in pretty much every way and aspect,” Hayden said on air during the 1st T20I.”

Hayden then praised the performance of the Australian squad with special praise for Green, debutant Tim David, and Josh Inglis.

“They are a depleted side but the reality of it is that they have got to dig deep. We have got to look toward what is next in the line-up. Young Inglis is such an exciting and young player. He is almost like a mirror image of David Warner. He is a right-handed version. He cuts, he pulls, he lays back and when it comes his way, he hits it through the on-side. He is also a very good powerful player,” he added.