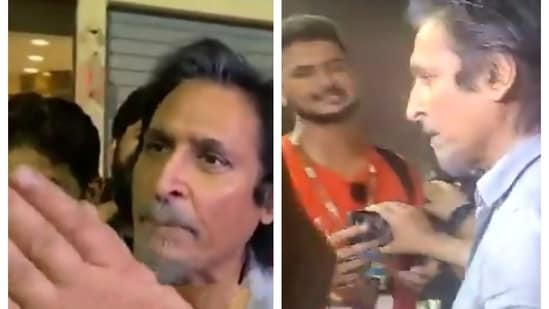 Ramiz Raza, the PCB Chairman was visibly troubled when an Indian journalist asked him question about his feelings on the loss against Sri Lanka in the Asia Cup Finals. A video shared by the journalist, shows hoe the PCB chairman snatched his phone while he was questioning him about his views on the question.

Raza ever sine he took the command of the PCB has been on the frontline about whether he should be placed as the head of the board or not. There has always been news around him weather its his fierce press conferences or his statements and erratic behaviour with the media personals.

His regime has always wanted results as he is clearly insecure by others who can take on his job easily. The 1992 World Cup winner Raza has produced significant results so far but the trophy was still far even when Pakistan were in a position to win the match when Sri Lanka was 58 for 5 in their first 9 overs.

While he was leaving the stadium, Raza was confronted by a rally of question and many of them were displeasing and one of them came in the described incident. Here is a transcript of the incident.

Journalist: “Awam badi nakhush hai. Unke lie koi sandesh? (The people must be unhappy. Any message for them?)

Journalist: “Hum khush nahi hai. (No, we are not happy).”

After this last statement, Ramiz was seen snatching the phone of the reporter Rohit Juglan to which the reporter confronted the PCB Chairman to behave with decency. He said, “Please ye hath hataiye. Aur aap camera se thoda side ho jaye (Please keep your hands off me and stay away from the camera).”