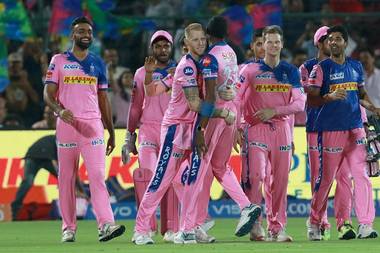 The West-Indian flamboyant batsman and an emerging speedster has been roped in as replacements for England’s duo wicket-keeper batsman Jos Buttler and world-class all-rounder Ben Stokes.

Jos Buttler was set to miss the SECOND Leg of IPL2021 starting from 19th September as he was expecting his 2nd child. Whereas Ben Stokes has taken indefinite break from all forms of cricket citing mental health issues and bubble fatigue.

The Flamboyant batsman who is in a good form in the Carribean Premier League, has been added due to the fact that Rajasthan Royals is missing their key opener Jos Buttler. Evin Lewis will look to fill up that slot. He has played in the IPL for Mumbai Indians and has scored 430 runs in 16 innings. With his good record in the IPL, the left-hander has made a big impact in the international cricket as well. He has scored 1318 runs in 45 T20i’s with a strike rate of 158 since his debut in 2016 at the T20 World Cup for West Indies.

Whereas Thomas has only been featured in 4 IPL matches, that was only for Royals. He has bagged 5 wickets in those 4 innings. Currently he is playing for Barbados Royals in the Carribean Premier League. The right arm pacer made his debut in 2018, and so far has bagged 27 wickets in 20 ODI’s and 19 wickets in 17 T20i’s. He was also the recipient of West Indies Emerging player Award.

Royals had earlier announced South African legspinner and World No.1 T20I bowler Tabraiz Shamsi as replacement for Andrew Tye while Glenn Phillips was brought in for Jofra Archer.

Royals are fifth in the table with three wins from seven matches.

1 thought on “IPL2021 : NO BUTTLER AND STOKES FOR 2ND HALF OF IPL2021. RR CALL FOR EVIN LEWIS AND OSANE THOMAS AS REPLACEMENTS.”