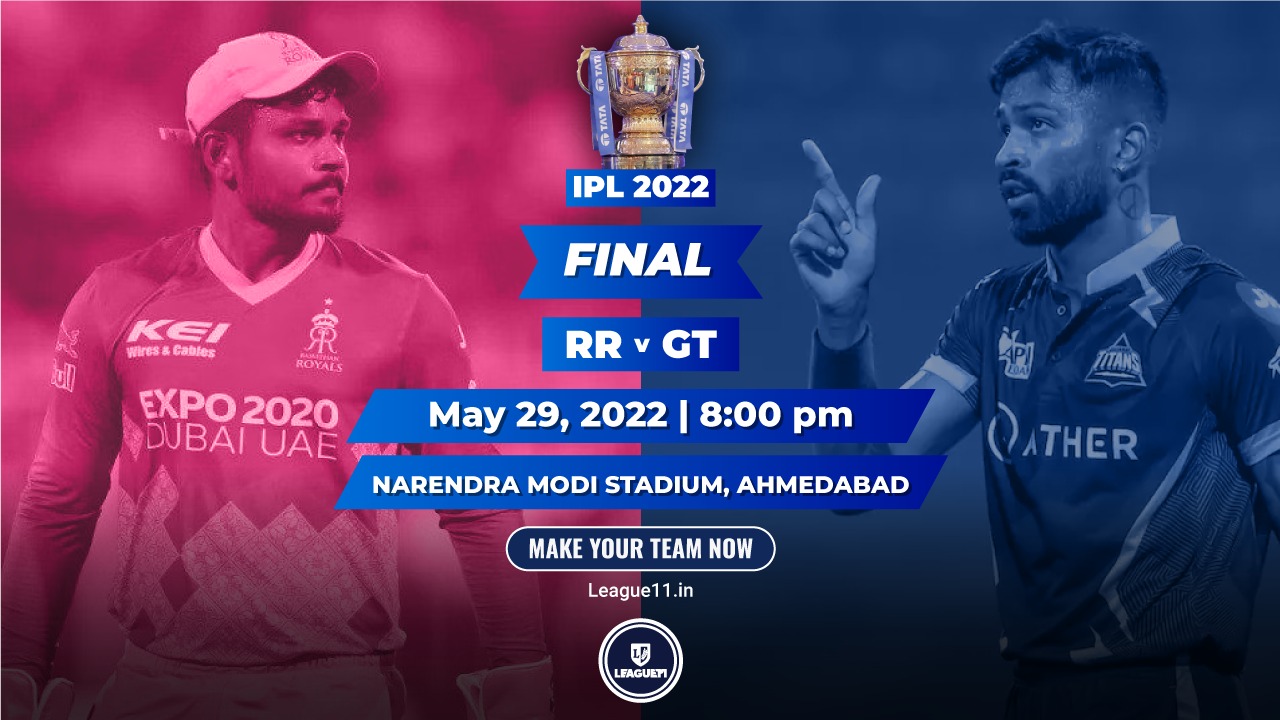 After two months and 73 matches, we are finally looking towards the climax. Rajasthan Royals were the first team to lift the IPL trophy. On the other hand is Gujarat Titans who are looking to achieve the same feat which RR did 15 years ago.

Gujarat Titans are chasing a dream that only appears once in the lifetime of a franchise. They stand against an opponent who is looking to restore their long lost glory. Rajasthan Royals has struggled to live up to the expectations of their fans after the success they tasted back in 2008. Sanju Samson will become the first captain to lead RR into their second final. After years of endeavour, Rajasthan has found a way to spread its wings in the open wide sky.

Gujarat has made their place in the hearts of the IPL fans within a single season. Their sheer level of dedication and resolve is the reason for the number of victories they have had in this season.

Their last encounter ended with the Gujarat Titans victory. This time Rajasthan Royals will look to turn the tables around. Playing in the IPL final is different from playing a play-off fixture. IP final has a different dimension to it. The adrenalin rush, passion among the fans, and nerves kicking in make it a completely different fixture than any other match. All your efforts can be undone in a single match. Moments will pass through your eyes as you reach the last bits of the game. Realization slowly starts to kick in with every passing second. This clash will not be anything like you have ever seen before.

Fantasy Players will need to make some tough choices in order to maintain the balance. Some players will be dropped while some unconventional players may have to feature in your team. But captaincy and vice-captaincy picks will be more crucial in comparison to your playing eleven. According to the statistics, these players are the best picks for captaincy –

For Vice Captaincy here are the top four picks –

Get ready for a thrilling encounter this will not be a repetition of the playoff. Toss will be a crucial factor in tipping the scales of balance. This decision can either win you the game or make you regret the two innings.

“Sky 247 is one of the upcoming providers of online gaming entertainment. Sky247 brings IPL 2022 live to their viewers so that they can enjoy all the thrill & get live updates of daily matches along with other predictions and analysis. This brand is one of the leaders in the sports industry. At Sky247 you will get details of all major cricketing and sporting events (IPL 2022, T20 World cup, India Cricket, other T-20 leagues, and super leagues, etc). Sky 247 has partnered with some global cricket events like the Lanka Premier League, Abu Dhabi T10, Sri Lanka India series 2021, etc. For more sports entertainment and details Follow #SKY247.”