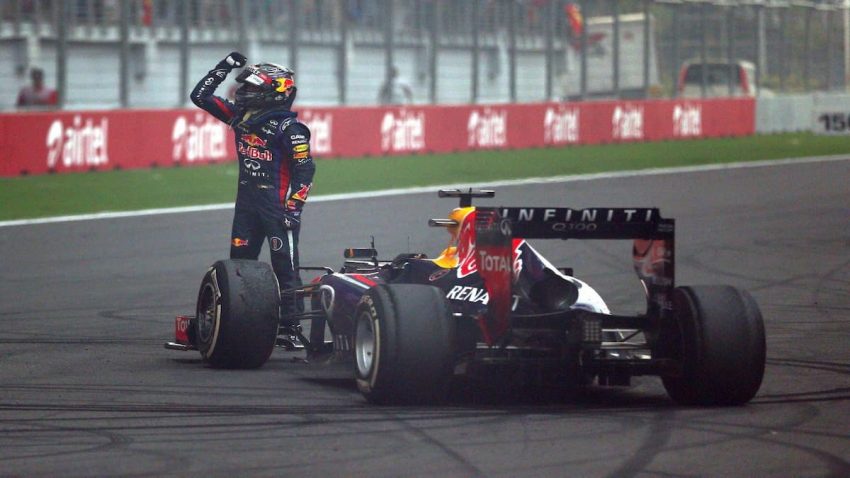 The Indian Grand Prix was part of the Formula 1 calender from 2011 till 2013. During this period, there were legends on the field in the form of Jenson Button, Lewis Hamilton, Micheal Schumacher, Kimi Raikonnen, and the man who always won in India, Sebestian Vettel.

The venue first made its appearance in the year 2011. It was a occasion in New Delhi as Formula 1 arrived there for the first time in its long history.

The race happened in the neighbouring state of Uttar Pradesh at the Buddh International Circuit. Sebastian Vettel, who was the defending World Champion at the time went ahead and sntched the pole position from Lewis Hamilton with Mark Webber starting third.

As the race commenced, it was Vettel who came on top with Jenson Button (2009 F1 World Champ) second and Fernando Alonso (05 and 06 World Champ) third.

The motorsport circuit again went to the Buddh Circuit and it was Sebastian again who took the pole position. Sebastian also won the race ahead of Alonso and team mate Mark Webber this time around. Jenson Button was the flying Brit in India who bagged the Fastest Lap Awarded.

In the 5.125 km long track, it was Vettel again who was at pole in India with him winning his third race in a row with Nico Rosberg and Romain Grosjean coming second and third in the race. Kimi Raikkonen.

The Indian was then set to miss the calender next year coming back in the 2015 season. Bernie Ecclestone then, the FIA boss at the time then doubt the fact and said it would be delayed till 2016.

Then he canceled the event due to a tax issue with the Uttar Pradesh Government and the CM of the state, Akhilesh Yadav was not ready to welcome Formula 1 as a sport and considered it a luxury entertainment and levied taxes on the event. One thing then led to another and the whole event was canceled altogether for the future.

Buddh Back In Business:

2023 will mark the year when motorsport will return in India as the Dorna group has signed a seven MoU with CM Yogi Adityanath backing the play.