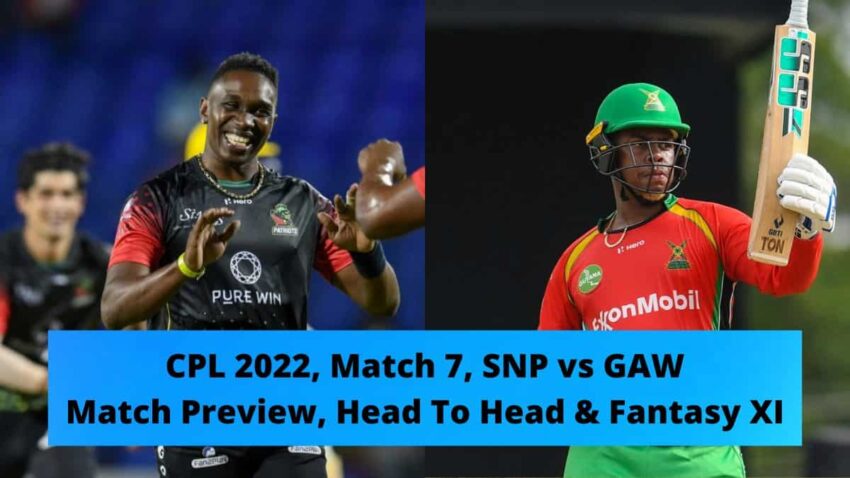 St Kitts and Nevis Patriots will play against Guyana Amazon Warriors in match 7 of Caribbean Premier League (CPL) 2022. Both the teams have had a rather poor start to their respective seasons and would hope to put a better show in this game.

St Kitts will be coming into this after back-to-back losses in its first two games and their third match abandoned as they would look to find winning ways to progress in the tournament. The team would hope this game proves to be the change of fortunes for them.

The SNP team has an explosive batting lineup comprising players like Andre Fletcher, Evin Lewis, Dewald Brevis, Darren Bravo, and Joshua Da Silva in their ranks. They have some really good bunch of all-rounders in their team with names like their skipper Dwayne Bravo, Dwaine Pretorius, and Sherfane Rutherford on their list. Dominic Drakes and Wanindu Hasaranga make their bowling look strong as the SNP team will look to get to winning ways to defend their title this season.

On the other hand, Guyana Amazon Warriors will rue the performance they made in their loss to Jamaica Tallawahs and would look to put up a better show in this game. They have a very strong batting unit with batters like Shimron Hetmyer, Colin Ingram, Shai Hope, Paul Stirling, and Chandrapaul Hemraj in their team.

The bowling unit also looks settled for the team with players like Keemo Paul, Imran Tahir, Tabraiz Shamsi, Odean Smith, and Romario Shepherd in their ranks. The GAW team also has in form South African wicketkeeper batsmen Heinrich Klaasen in their team who is set to handle the wicketkeeping duties for the team.

Both the teams are fit to go in this game and will look to field their best XI in the match.

CPL 2022, St Kitts and Nevis Patriots vs Guyana Amazon Warriors – 3 Players to Watch Out For: