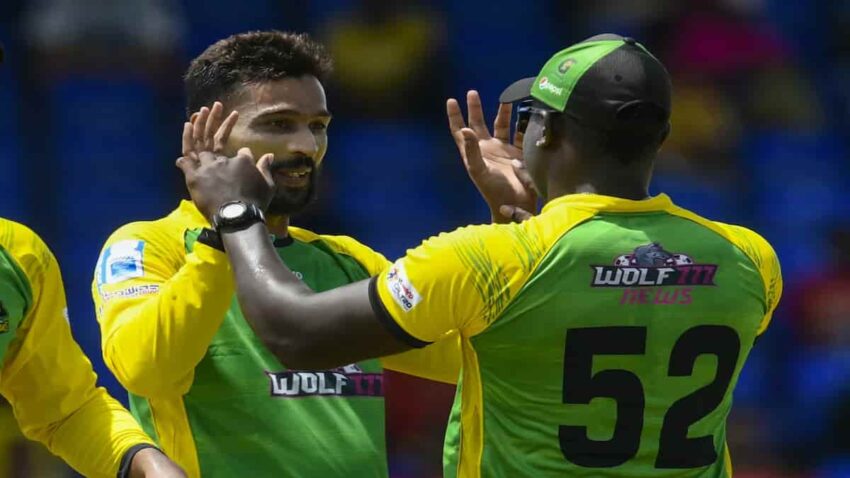 Jamaica Tallawahs beat Guyana Amazon Warriors by 4 wickets in Match 4 of Caribbean Premier League (CPL) 2022 played at Warner Park, Basseterre, St Kitts. Mohammad Amir and Chris Green were the stars for the Jamaican team as the side registered their second win on the trot in the league.

Earlier, Jamaica Tallawahs won the toss and opted to bowl first. Batting first, Guyana Amazon Warriors had a horrible start as they lost both their openers Paul Stirling and Chandrapaul Hemraj cheaply with just 5 runs on the scoreboard in 2.2 overs. Mohammad Amir took both these wickets as he created a sudden stir in the Guyana team lineup.

Shai Hope and Shimron Hetmyer then steadied the GAM innings but both these players played at a rather slow rate. Both these players added 66 runs for the third wicket but consumed 70 deliveries for the partnership. Romario Shepherd and Heinrich Klaasen brought some life to the innings of the Guyana team as they had a crucial partnership of 51 runs off just 28 balls.

Romario was the aggressor of the two as he played a fiery knock of 36 runs off just 17 deliveries with the help of 3 fours and 3 sixes. In the end, Guyana Amazon Warriors scored 142 runs for the loss of 6 wickets in their 20 overs. Mohammad Amir was the pick of the bowlers as he added three crucial scalps to his name. Chris Green also bowled well and ended with impressive figures of 4-1-5-0.

Chasing a target of 143 runs, Jamaica Tallawahs got off to a stiff start as they lost their opener, Kennar Lewis, cheaply. Shamarh Brooks also followed the suit and got on duck. Brandon King who was playing well at one end also got out after scoring 32 runs as the Jamaican team was seen struggling at 41 for 3 at that stage

Skipper Rovman Powell then steadied the Jamaican innings and played some astonishing hits for the maximum. Though wickets kept tumbling at regular intervals, it was Powell who maintained his calm and held his fort strongly.

In the end, Powell got great support from Chris Green as both the players added 39 runs off just 13 deliveries. The Jamaican team eventually won the match by 4 wickets. Mohammad Amir was adjudged as the man of the match for his great bowling upfront.