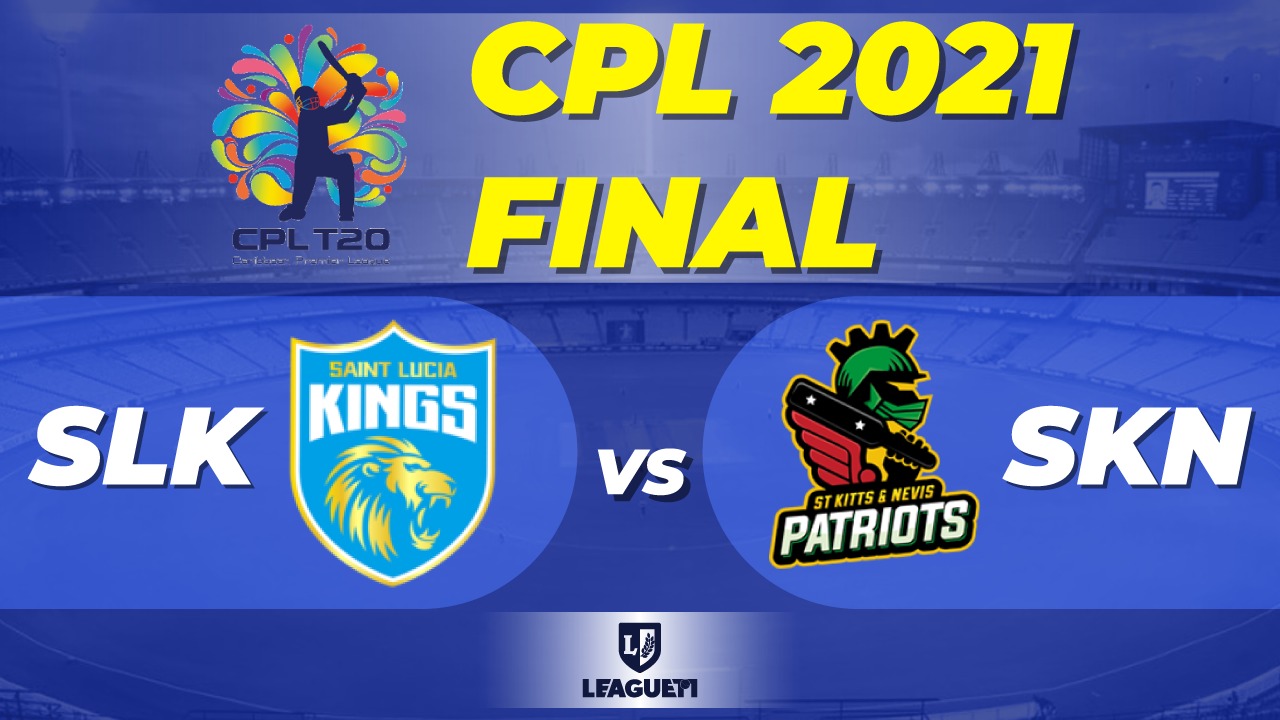 TWO BIG FISHES IN THE NET

3.5 : Riaz to Lewis, out Caught by Roston Chase!! It looks like a pre-planned strategy with Chase placed before at same place. Lewis c Roston Chase b Riaz 6(6) [4s-1]

3.2 : Riaz to Lewis, FOUR, lovely, fuller length delivery at the stumps, Lewis leans forward and thumps the drive back past the non-striker, straight of mid-on and it runs away to the ropes

2.4 : Roston Chase to Joshua Da Silva, FOUR, beautifully played, tad too short and wide of off, da Silva makes room and steers it behind square on the off-side – Wahab dives over the ball and concedes a boundary

1.2 : Riaz to Joshua Da Silva, FOUR, square of the wicket, trying to ease the pressure of one wicket down.

0.4 : Roston Chase to Gayle, out Bowled!! Chase draws the first blood and its a huge wicket. Universal boss is gone for a duck.!!! Gayle b Roston Chase 0(4)

159/7 – By Saint Lucia Kings…. A good recovery in the end overs due to an excellent cameo from Keemo Paul..

1 BALL LEFT FOR THE INNINGS, CAN WAHAB TONK IT FOR A SIX ???

After a six, Naseem has made a comeback with a wicket!!!

19.3 : Naseem to Paul : SIX : Misses the yorker and Paul converts it to a full-toss and fully tonks it to deep-mid wicket

18.2 : Drakes to Keemo Paul, SIX, Keemo is playing a lovely cameo here, on a length and just outside off – he runs down the wicket, made room and then drilled it back over the bowler’s head, went sailing into the stands for a maximum

BACK TO BACK SIXES FROM KEEMO PAUL. HE IS A POWERFUL HITTER !!!

18.1 : Drakes to Keemo Paul, SIX, that has been clouted, hit with the wind and it kept sailing over the fielder in the deep – full and wide of off, Keemo fetched it with a violent swipe

Ahmed finishes his spell not so on a good note.

16.3 : Fawad Ahmed to Keemo Paul, SIX, to deep square leg, he is smacking them so easily. These are crucial runs from Keemo. Can he hit one more ???

16.1 : Fawad Ahmed to Roston Chase, SIX, nicely played, that’s a good start for the over, too full from Fawad – Chase leans forward, high elbow and a neat swing of the bat, sent it soaring over long-on for a maximum.

Patriots have a really good record in stopping teams in the last 4 overs. Even Roston Chase is feeling the pressure now.

SPINNERS ARE ON TOP THE BATSMEN. THE WICKETS ARE FALLING IN A BUNCH..

13.6 : Jon-Russ Jaggesar to Roston Chase, SIX, lovely, expensive finish from Jaggesar – slower and just outside off, Chase leans forward, high elbow and a straight bat as he lifted it over long-on for a maximum – 15 from the over

13.3 : Jon-Russ Jaggesar to Tim David, SIX, clubbed, dropped tad too short and David is all over it in a flash – rocks back and pummels the pull wide of mid-wicket, flat and over the ropes for a maximum

11.1 : Jon-Russ Jaggesar to Wiese, out Bowled!! He didn’t take the opportunity to get that single last ball and now backs away too much and misses this away-spinning ball completely. Jon-Russ Jaggesar was troubling batters with the away angle from round the wicket too. Tough to negotiate and the stumps are disturbed. Wiese b Jon-Russ Jaggesar 2(6)

9.3 : Jon-Russ to Cornwall : FOUR : Cornwall was trying to score from 2 overs and now gets his chance and hits it to his favourite area- mid-off.

A very good over from Allen, kept the batsman alert and tested him the whole over.

A stumping appeal from Joshua De silva, but NOT-OUT shows the screen.

6.6 : Fawad to Chase : FOUR : Took on the bowler and smacked it straight down the ground.

6.2 : Fawad to Chase : FOUR : Tried to improvise, wanted to hit somewhere else and went other way. 50 COMES UP FOR THE TEAM.

A MAIDEN OVER FROM SHAH, A very tight over….

EVIN LEWIS IS GOING OUT OF THE FIELD, EXPERIENCING SOME PAIN..

4.6 : Drakes to Cornwall : FOUR : HATTRICK of Boundaries and he is in full mood to play a long and firry innings.

4.5 : Drakes to Cornwall : FOUR : In the same direction, he is swinging the bat and ball is following it.

4.4 : Drakes to Cornwall : FOUR : Was not in control of that shot but had the power to smack it over the keeper.

All on Roston Chase now, only batsman in form.

Bravo trying all his options. Naseem Shah comes to bowl.

2.5 : Fawad to Fletcher : WICKET, Tries to go big, but has surely got into the web of Fawad Ahmed. A brilliant take from Cottrell as well.. Fletcher c Cottrell b Fletcher 11(7) [6s-1]

Captain decided to bring another spinner, looking to use the moisture of the pitch

1.3 : Allen to Cornwall : FOUR : Takes a calculative risk and clears over midd-off.

We are back in field and with a single, over comes to an end.

STAY TUNED… WE WILL BE BACK WITH LIVE UPDATES

0.4 : Cottrell to Fletcher : SIX : The captain tonks it for a six on mid-on. Length ball and came forward and smacked it.

NEWS FROM IS SAINT LUCIA HAS CHOSEN TO BAT . KESRICK WILLIAMS IN FOR KADEEM ALLEYNE.

Dwayne Bravo: Happy, would have bowled anyway. They play to their strenghts, we play to our strengths. They presented me a shirt with 500 today morning, second player to play 500 T20 games after my friend. One of the reason why I moved here was to put myself in a challenging position, get the team to win trophies. Today we have my experience, Chris, Lewis, Emrit is there.. May the best team win. We are not changing the side, tough luck to the guys missing out.

Andre Fletcher: We are going to bat. That is our strength and we beat them in the two leagues doing the same as well. But it doesn’t matter and we need to do well today. Once we do the basics better than them, then I believe we can easily beat them. We don’t want to take them for granted. Kesrick Williams is playing in place of Kadeem Alleyne.

Saint Lucia Kings have won the toss and have opted to bat.

Welcome to the CPL final, which has been a long time coming. Saint Lucia is in their second consecutive final, but after winning only one game and finishing last in 2020, Saint Kitts has had quite the tale this time. For the year 2021, they made a staff change. When Dwayne Bravo took over the reins, everything changed. With five wins in a row, they were on top of the league. Faf and his companions, on the other hand, came to a halt in the middle of their journey. Not only did Saint Lucia end their winning streak, but they also lost back-to-back games. Bravo’s team then had to hustle in the second half, winning only one of their last five games.