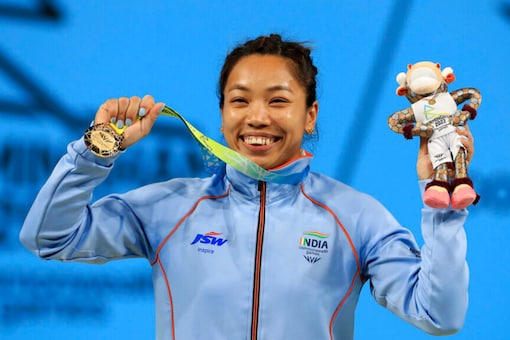 Mirabai Chanu, one of India’s top gold medal prospects, lived up to expectations by clinching the first gold medal for the country at the Birmingham Commonwealth Games 2022 by finishing first in the women’s 49kg weightlifting final.

Mirabai Chanu, one of India’s top gold medal prospects, lived up to expectations by clinching the first gold medal for the country at the Birmingham Commonwealth Games 2022 in the women’s 49kg weightlifting final.

Chanu, who had won the gold four years ago in Gold Coast, not only defended her title successfully by lifting 201kgs (88kg in snatch and 113kg in clean and jerk) but set a Games record. Chanu’s efforts secured India’s third medal of the day – all three in weightlifting after Sanket Sargar had won silver and Gururaja Poojary had claimed bronze in their respective events.

Just how dominating Chanu’s performance was can be estimated from the fact that between her and silver medallist Marie Ranaivosoa of Mauritius, the difference was a huge 29kgs.

It took a while for Chanu’s turn to come but you knew she was up next when the support staff added weights to the barbells. In the first attempt itself, Chanu successfully lifted 84kg, taking an 8Kg-lead over the second best.

In her next snatch attempt, Chanu added 4 more kgs and lifted 88kgs with ease, storming to her personal best and setting a CWG record. Heading into CWG, one of the hypes surrounding Chanu was whether she would be able to lift 90 kgs. She decided to go for it but unfortunately, wasn’t able to pull it off.

That little blip however had little effect on the outcome of the contest. In her first attempt of clean and jerk itself, Chanu lifted 109kgs to confirm the record and India’s first gold of this edition of the CWG.

But Chanu wasn’t content there. In her second attempt, she added 4 kgs more, gripped her hands around the barbell, and successfully lifted a whopping 113 kgs.

Chanu attempted 115 kgs in her final attempt, and although she couldn’t land this one well, it did not matter. It was finally time for the Indian National Anthem to play out loud in the arena.

This is Chanu’s first big result since her Olympics exploits last year. Much like her other celebrated Olympic medallists, the 27-year-old weightlifter has gone a bit quiet post her Tokyo thud.

Chanu had competed in just one tournament since the Games last August, at the Singapore International in February where she won the 55kg category lifting 191kg.