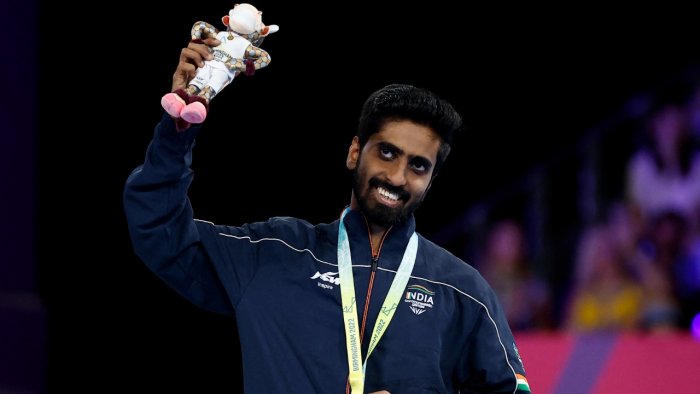 G Sathiyan engaged in a thrilling contest against England’s Paul Drinkhall and won the contest 4-3.

G Sathiyan won the bronze medal in the men’s singles table tennis at the Commonwealth Games in Birmingham on Monday. The Indian engaged in a thrilling contest against England’s Paul Drinkhall and won the contest 4-3.

The match started with Sathiyan winning the first three games to take a 3-0 lead. However, Drinkhall ensured it was not a cake walk for the Indian as he went to win the next three, before pushing the final game right down the wire.

The contest started with a neck and neck opening game tussle, which saw the lead swing from end to the other. Such was the intensity that the biggest lead which Sathiyan, who won the game 11-9, could manage was three points.

He then carried forward the momentum in the third game and secured an early lead. His opponent showed signs of comeback but failed to do much after the midgame interval, which was taken when Sathiyan was leading 5-4. He fizzled out soon as the Indian closed the third game at 11-5.

The fourth game once again saw Drinkhall making strides. However, this time he was the one commanding the show as he took six consecutive points to make it 9-5. However, Drinkhall lost his grip as the Indian went to secure the next three points. But crowd played its role and lifted the spirit of local paddler Drinkhall, following which he won two consecutive points to wrap the game at 11-8.

The fifth game saw an intervention by the official as had a few words with Drinkhall, after he kicked the ball away as Sathiyan completed an excellent drop shot to take the score to 3-4. The proceedings resumed after a brief interval following which Drinkhall gained a lead before Sathiyan bounced back to make it 9-7. However, Drinkhall held his nerves and won it 11-9.

The sixth game was another thriller between the two, who refused to give up. Sathiyan, who was trailing 5-9, rallied from behind to level things up. But Drinkhall eventually wrapped things up at 12-10 to tie the score between the two at 3-games each.

Sathiyan then took an early control in the final game as he gained a healthy lead of 7-1. But Drinkhall bounced back and made it 5-7, before an error by the England paddler saw Sathiyan rise to 8-5. Drinkall, however, continued his gritty display and went on to secure the next four points, pushing Sathiyan on the backfoot. However, it was the Indian who came back from 8-9 down to win the final game 11-9.