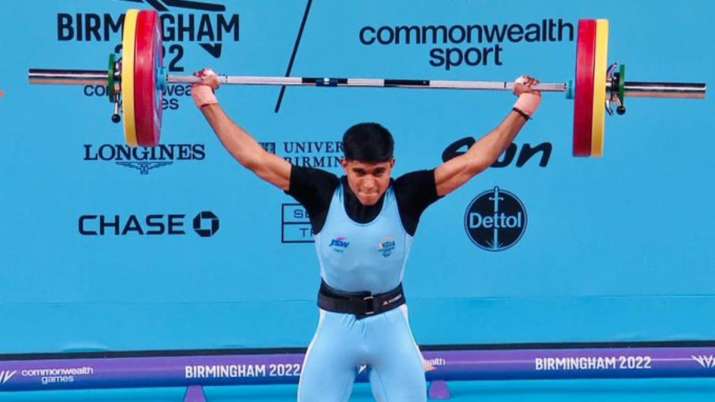 Sanket lifted 113kgs in the snatch before lifting 135kgs in the clean and jerk for a total of 248kgs. Sanket Sargar won India’s first medal at the 2022 Commonwealth Games with silver in the men’s 55kg weightlifting event in Birmingham on Saturday. Malaysia’s Mohammad Aniq Bin Kasdan snatched gold with 249kgs (107kgs snatch and 142kgs C&J) with his final attempt.

The Sangli-born 21-year-old weightlifter lifted 113kgs in the snatch before lifting 135kgs in the clean and jerk for a total of 248kgs. Sri Lanka’s Dilanka Isuru Kumara Yodage took bronze with 225kgs (105kgs snatch and 120kgs C&J).

Sanket started weightlifting as a 13-year-old in 2013 with his sister also a weightlifter. Sargar came into Birmingham winning the National Championships and the Singapore International.

Kasdan was one of the favourites to win the event having won the clean and jerk silver at the World Weightlifting Championships last year and also winning overall gold at the 2021 Commonwealth Championships.

Sanket Sargar has injured himself in CWG 2022:

Lifting first in snatch, Sanket comfortably lifted 107kgs which was matched by Kasdan. The Indian raised the bar to 111kgs which also prompted Kasdan to increase his second attempt from 109kgs to 111kgs. While the Indian was successful with his attempt, Kasdan fouled out. Sanket increased the pressure on Kasdan by increasing the weight to 113kgs for his third attempt. Kasdan stayed with 111kgs but was unsuccessful.

Sanket lifted 113kgs and let out a roar knowing that the gold medal was his to lose going into the clean and jerk event.

Essentially he needed one good C&J to assure a medal. Sanket was successful with his first clean and jerk attempt of 135kgs.