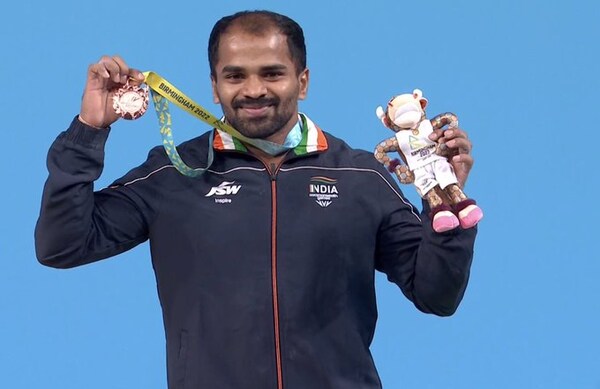 Gururaja Poojary successfully lifted 118kg in the Snatch round before lifting a massive 151kg in the Clean and Jerk round.

Gururaja Poojary took home the bronze medal as he added to India’s tally on day 2 of the CWG with a total of 269 Kg.

Malaysia’s Aznil Bin Bidin Muhamad lifted a combined 285kg in both rounds to win the gold medal and create a new Commonwealth Games record in the category.

He finished as the leader in the Snatch category with 113 kg. He lifted a best of 118 kg in the clean and jerk category. In the third attempt, he failed to lift 120 kg.

Gururaja Poojary ranked fourth after the snatch round. He lifted 115kg in his first attempt and 118kg in his second attempt, but could not lift 120kg in his last attempt. Malaysia’s Aznil Bin Bidin Muhamad was placed first with a lift of 127kg, followed by Papua New Guinea’s Morea Baru and Canada’s Youri Simard.

Gururaja Poojary demonstrated some fantastic lifting skills under pressure to ensure that India will earn a medal. Also, that is in the 61 Kg weightlifting event.

Gururaja won the silver medal in the Commonwealth Games 2018. (ANI)