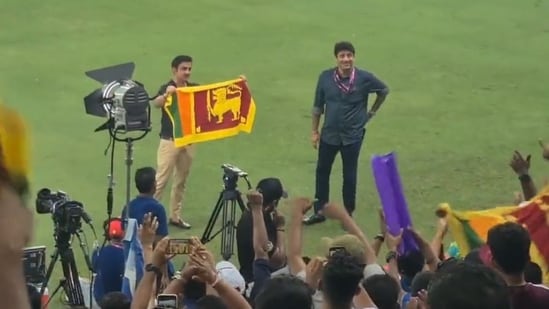 Indian opener and the man who scored highest in both the World Cup finals he played, Gautam Gambhir shared a video on his twitter account where a congratulation was captioned for the host nation of Asia Cup 2022.

The final Sri Lanka played against Pakistan was nothing short of a page from the novel of greatest comebacks in the history of the game of cricket. After being cornered for 58 for 5 in 8.5 overs, the Lankan Lions made a gladiator sort of comeback and ended their inning on a score of 170 for 6 in the final over.

The men in green tried to chase it down but were hunted one by one by the lion pack from Lanka. Pakistan could only muster up 147 before their final wicket fell and they lost the match by 23 runs making Sri Lanka the Champions of Asia.

Gautam Gambhir, who was part of the Star Sports commentary team was seen congratulating Sri Lanka by holding and supporting the Sri Lankan National Flag and acknowledging the teams journey from ashes to crown.

He captioned, “Superstar team…Truly deserving!! #CongratsSriLanka.” This post had reactions of all sorts around the globe and drew attention in a positive manner.

This tweet has got reaction of all sorts from all around the globe. With many supporting the spirit and supporting the gesture from the veteran Indian batsman then their are those who are against the decision and saying how could he raise flag of another country when his own lost and he is in constitutional post in India.

All these things to say after this gentlemen reaction from the Batting legend is nothing but a method of demeaning the sportsmanship of the game and should not be payed any attention to.